Get your Portrait in a Genuine Soviet Propaganda Picture.

Propaganda posters of the Soviet Union are perhaps one of the greatest legacies left behind from those times. With the Russian revolution of 1917, came forth a group of people whose ideas were radically different from their predecessors. This gave way to a new medium for expressions, that of propaganda or political pop art. Soviet propaganda emerged as an experimental art form to have a unique look of its own.

The posters of those times vary in style and message. Some of them showcase Lenin and his abilities as a great orator or leader, others showcase the causes of those times, highlighting on liberation of women, illiteracy or on the effects of war. Also with many people being illiterate, these posters used sharp pictures to convey the message.

We have a list of available soviet propaganda styles for you to choose from. If you so desire, you can also opt for colour schemes or designs of your choice and our designers will help you through.

There are no reviews yet.

Be the first to review “Soviet Propaganda Art” Cancel reply 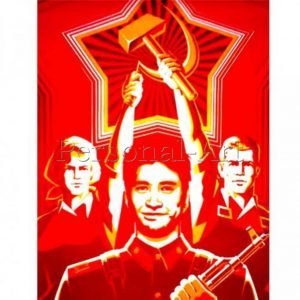