Get your Personalised Portrait in the style of Marylin-Monroe’s Portrait by Andy Warhol.

Order a Personalised Portrait from your Photos in the style of Marylin-Monroe’s Portrait by Andy Warhol.

Marilyn Monroe was a sensation, and her charisma continues much longer than her life. Though she featured in a million photographs and a thousand portraits, one of the most celebrated works on her continues to be the Andy Warhol series. Colour affects mood, character and appearance, and in no place is that more obvious than these pop art creations.

The story behind creating ‘The first Marilyns’ had an interesting start. It all began with Warhol’s early experiments with techniques and printing methods that were quick, durable and easy to put together. The silk-screening technique was soon created, whereby Warhol could easily replicate a print effectively in a shorter period of time.

It also happened to be the time when the legendary icon Marilyn Monroe committed suicide in August 1962. As Warhol was an admirer of the celebrities and celebrity high-life, the two events came together. And he thought that there was no better way to pay a tribute and make the icon of Monroe timeless, on his canvas using his new silkscreen technique. To begin the process, he purchased a legendary shot of the star taken by Gene Korman for the film Niagara made in 1953. He cropped the image, enlarged it and reproduced in on 8 canvases, each with a different colour scheme. For this, he would take a picture, blow it up in size, transfer it in glue on to silk. He would then roll ink across such that the ink would go through the silk, but not the glue. The technique could give him something stronger that gave more of an assembly line effect.

The Monroe Canvas
As a result, various legendary Monroe canvas prints were born. As each personality has varied shades, the hues in the Monroe canvas depict her different colours, moods and attitude. The Gold Monroe, admirers say, depicts her iconic status, affection of her fans and the sheer lonesomeness of life. The canvas is an iridescent gold with her face silkscreened in the center of the composition. Her face is painted like a newsprint advertisement, that for some marked a throw-away in life. Monroe, after all, was treated like a sex-symbol, and the tag stayed till the end of her life, something that Monroe retains on the canvas.

The lemon Marilyn has a complementary fuschia, two-tone blue and dual-yellow colours. Perhaps the dispersion of the yellow being highest, makes the portrait stand out from the lineup. Today it is a part of the same private collection from its 1962 acquisition till it was offered in auction in 2007. It is estimated to cost over eighteen million dollars US. The ‘Marilyn Diptych’ comprises of 50 images of the actress based on a single photo. In this series, 25 pictures on the left of the Diptych are brightly coloured with a gold background. The remaining 25 on the right are in black and white and are shown to be blurred and faded. Currently on display at the Tate Gallery, Liverpool, these are supposed to be one of the most influential pieces in modern art. As per critics, these are said to depict the two sides of Monroe: her life and mortality.

‘The Shot Marilyns’ is yet another celebrated work by the artist from 1964. It depicts four square canvases of Monroe, with each picture of her shown with a bullet shot in her head. An interesting story is associated with them. Apparently once Warhol finished doing them up, he took them to his studio ‘The Factory’. There Dorothy Podber, a friend, asked Warhol if she could shoot them. Thinking that she meant a photo-shoot, Warhol agreed. But soon, she had donned white gloves, taken out a revolver and actually fired a shot at the four stacked Marilyns, giving them that name.

Besides the above, Warhol depicted the icon in other colours too. Infact, some records indicate that Warhol made over 20 silkscreen paintings of her. The 10 Marilyns (1967) is another celebrated work by the artist and popularly available. Some form a part of private collections and are valued at high prices. Each of the colours is unique depicting the myriad shades of her personality. What’s unique
Perhaps the most unique feature of this portrait is where it was adapted from. Warhol took a photograph known to millions, and transformed it into something new. Though his sourcing option was limited, what he did with it was unparalleled. Through these pop art portraits, he undermined the uniqueness and authenticity characteristic of traditional portraiture. And through these, he succeeded to present Monroe as an infinitely reproducible image.

For many it is difficult to make an intellectual-emotional bond with the work of Warhol. Only a detailed study and a deep interest and understanding can bring forth the story that each of his works tries to tell. In fact, in these series itself, different viewers and critics see these as frank expressions of his sorrow at public events. Some also say that the images depict the fusion of two consistent themes of Warhol’s work: death and a celebrity cult. For those who are interested in viewing more interesting portraits by Warhol or seeing more of Monroe portraits in diverse styles, Personal Art offers a great experience, that you can begin here.

There are no reviews yet. 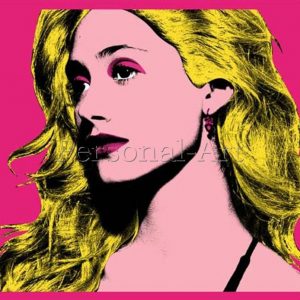